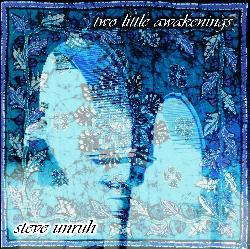 "All of Steve's albums come highly recommended, the man is quite simply a unique talent amongst a miasma of mediocrity. However, this new and genuinely improved version of Two Little Awakenings may just be his progressive rock masterpiece. Conclusion: 9+ out of 10." Mark Hughes, DPRP.net.

Two Little Awakenings - the 2005 re-release is a 78-minute single CD version of the 2001 album. It's been re-mixed and remastered in 24-bit processing from the original multitrack recordings, and edited (with great care) to fit on a single CD. (TLA was originally a double CD, and was no longer in print because of the time, expense, & trouble of manufacturing.) Additionally, I always felt the original version was a bit long and unfocused, and this new format lets the best of the material shine, if I say so myself! I love this re-release... it's Two Little Awakenings as it should have been presented in the first place. Wonderfully enhanced sound quality (more clarity and dynamic range), and a tight running order. I spent several weeks working with the sound and artwork for this re-release, and I think it shows.

TLA is a progressive folk-rock album, full of epic pieces. Really, you can tell I'm pretty happy with the way this version turned out, because I'm finally able to forego disclaimers and just say, "I'm quite proud of this CD now, and think it's one of my best works." Here's the running order:


Credits: Steve Unruh - Acoustic, electric, & classical guitars, violin, drumkit & percussion, mandolin, bass, keyboard, flute, vocals. Composed, recorded, mixed, & mastered by Steve. Side note: If there was ever a Steve Unruh collectors' item, the small, numbered, original release of TLA from 2001 would probably be it. (But I'd rather have you listening to the 2005 version!)