songs from the flowered chair 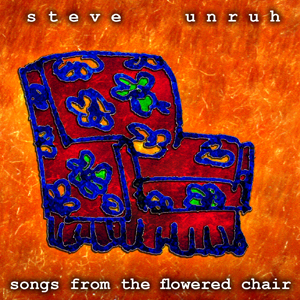 Available bundled as a single Zip file. Right-click download here for the Entire Album (with art) as a Zip file. Or, as individual mp3 files below...

'Songs from the Flowered Chair' is a collection of tunes from my back catalogue - mostly from the 'Two Little Awakenings' time frame. These recordings had either gone out of print or had never been released. I remastered these "B-sides" and have tried to assemble them into a cohesive "EP" album. Between my official albums and this EP, I think you'll have access to nearly everything I've recorded so far - at least the stuff worth hearing.

When I re-edited the album, 'Two Little Awakenings,' from a double CD down to a single CD in 2005, several songs had to be cut. Many of these songs were of pretty good quality, I think, but nonetheless they disturbed the continuity of that album. 'Two Little Awakenings' makes for a much better listen now. However, that put some good material in limbo. 'Songs from the Flowered Chair' includes everything which was cut from the original 2-CD version of TLA.

As for the tunes on this EP that didn't come from TLA... The compilation album, 'Instrumental Retrospective' has gone out of print and I probably won't re-manufacture it. I've included two recordings which were previously only available on that compilation. (The other music from 'Instrumental Retrospective is either available on my other albums, or was recorded with a group so it isn't part of my solo catalogue.) In 2005, I recorded a couple of songs for guitar and voice which I'd written around the time of TLA. "Fragile" is easily the best of those songs.

'Songs from the Flowered Chair' is arranged with the composed songs presented first, followed by two lengthy improvisations. The first improvisation is me, surrounded by a bunch of instruments, with my "foot percussion rig." A real "one man band" tune! I recorded this in the living room of a second-floor apartment - and the walls and floor were pretty thin, so it's amazing my neighbors put up with this. The second improvisation was recorded on a windy winter day. You can hear the wind in the background, and I like to think that it guided the way I played the improv.

I decided to call this EP "Songs from the Flowered Chair" because I wrote many of these tunes while sitting in an old flowered plush rocking chair. When I was a child, that chair was in my grandmother's living room, but eventually it got banished to her basement because it didn't fit with any decor made after 1980. When I was in my early 20's, I needed cheap furniture so I wound up with it - and kept it for several years because it was so comfortable. (The song on 'Two Little Awakenings' called "From the Flowered Chair" was, of course, written from that chair... but that song's on the TLA album, so it's not included on this EP.) The artwork is adapted from a sketch I made of the old chair several years back, and which I originally considered for including in the TLA booklet.

To make 'Songs from the Flowered Chair' sound like a cohesive album, I made a new mix (2008) of everything from the original multitracks. The sound fidelity is pretty good, I think! I've posted the album as 256 kbps mp3 files, so it may take a little while to download if you have a slow connection - but that way it's almost CD-quality, if you want to burn it to a CD. I've provided an album cover for those of you that burn this to a CD. Listening through this EP, I'm surprised by how well it all comes together - you'd almost think I intended these songs to be assembled this way from the outset. So, I guess it's worth considering as part of my solo catalog. I hope you enjoy it!

Instructions: Download all tracks. (Windows users - right-click, save target as...) Burn them in numbered order to a music CDR, using the "disc-at-once" option (to avoid those annoying gaps between songs). Download the artwork pdf files. Follow the printer instructions here. (Older versions of Acrobat have the same options, but look a little different.) Cut out, assemble, and voila... free CD.