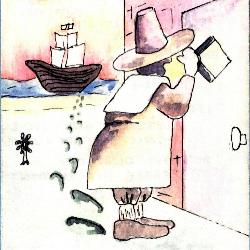 Available bundled as a single Zip file. Right-click download here for the Entire Album (with art) as a Zip file. Or, as individual mp3 files below...

The Story, according to Steve

Back when I was 20, I was the drummer in a college jazz ensemble. Some of the guys in the jazz ensemble told me they had a rock band on the side. I went to see them one night, and I was blown away. Eventually, their drummer moved on, and I was able to join the great and fun-loving bunch that would become Deadwood Dyck. My life would never be the same. Without them, I might have stayed in my little shell, but fate and a rock'n'roll band opened me up to the following valuable experiences:

But after all the fun and craziness, it was always about the music. These guys could PLAY! Plus, Rob had a great mature rock voice, and it all just fit together so well. I really miss this band. And recently, all 5 of us (who have scattered to different parts of the world but still email each other once in a while) confessed the same. If there was a way this band could come back to life, we'd do it in a heartbeat. 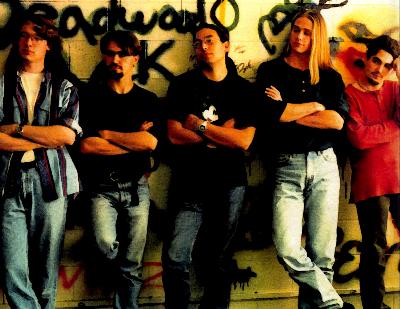 The Band (left to right):

The name of the band was kind of an issue with us... we started out as... you know what, I'm not even going to mention what we called ourselves when we started out. Just know that it had to be changed so we weren't embarassed and we could get booked. After a long search, we settled on "Deadwood Dyck." Still perhaps mildly suggestive, but certainly less so than our first name, and a couple of the guys in the band had the last name Dyck... Deadwood Dyck was a "cool" western historical figure... and, well, that was that.

Deadwood Dyck played a lot of classic rock tunes, and I think it's easy to hear the "classic rock influence" in our style. As time went by, we started to get serious as a band, so of course we wanted to make an album. We all set to work composing music and lyrics, and "No More Pilgrims After 5" is the result. (Yes, there is a funny story behind the album's title, but I won't print it here!)

We recorded the album in a great big TV studio room using good (borrowed) microphones and a decent mixing console, but with only my little 4-track tape deck as our "master tape." (Hey, it was 1995 - inexpensive fancy multitrack home recording didn't exist yet.) So, my musical companion and resident supertalent Laura Cossey helped us by mixing the instruments, live in the studio, to 2 tracks. (We ran the best quality tape cassettes we could find at double speed, and that actually worked pretty well). That left us with 2 tracks to overdub the vocals and any special effects we wanted. One of my favorite overdub sessions was recording the saxophone solo to "Alone" in a chapel, with mic #1 right beside the saxophone and mic #2 at the back of the chapel catching natural reverb. We then mixed the album in one of the band member's apartments, adding the reverb and such. (In fact, the phone call you hear at the end of the album is one of the neighbors calling to complain about the noise when we were adding the "bar" sounds near the end of the whole process.)

In a typical end to the story, nothing big developed from the album. We sold several copies locally, but everybody was trying to finish up their college courses and graduating, and we never pushed to get a recording contract. We graduated, went our separate ways, and 10 years passed by. Recently, I revisited the album, and was surprised to hear how good it was! I mean, can you really expect that something you did when you were 22 would still impress you 12 years later? So, I spent some concentrated time and rather painstakingly remastered the original mixes (which had been stored on DAT tape). I sent copies to all the band members, and everybody had the same reaction as me, which is, "Wow! I didn't remember this was so good!" So, rather than let the album continue to rest in obscurity, we have collectively decided to give it a permanent home on my website. And, to get you to listen to it, we're giving it away FREE.

Presented in hi-fi 256kbps mp3 format, the album actually sounds much crisper and clearer than it did in its original issue back in '95. So download these tracks, and enjoy some good 'ole rock'n'roll!!! Considering this was made by a bunch of guys in their early 20's with no record contract or real recording experience, I think we did ourselves proud. We hope you have a fun time listening to it.

Simple Instructions: Download all tracks. (Windows users - right-click, save target as...) Burn them in numbered order to a music CDR, using the "disc-at-once" option (to avoid those annoying gaps between songs). Download the artwork pdf files. Follow the printer instructions here. (Older versions of Acrobat have the same options, but look a little different.) Cut out, assemble, and voila... free CD.