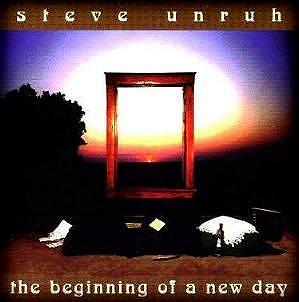 "Rating 5/5... This is a really quality disc and it marks Unruh as a hugely important artist in the progrock pool... Poets take note. This is one for you." (ProgPower.de)

Credits: Steve Unruh - Acoustic & classical guitars, violin, drumkit & percussion, mandolin, bass, flute, harmonica, vocals. All pieces composed by Steve. Recorded by Ron Tozier. Mixed by Ron and Steve. 'The Beginning of a New Day' was the album I always wanted to make. Lyrically, I was able to incorporate a slew of cross-references and double meanings. Musically, the album is tied together with leitmotifs run rampant - weeks were spent designing the instrumental counter-melodies, many of which are re-arrangements of vocal lines from elsewhere on the album (suggesting hidden interpretations of lyrics when the words are referenced in the different contexts). It was written in a time of solitude, when I lived by myself in a small house, and a series of near-catastrophic decisions in my personal life had forced me into being deeply introspective.

When the time finally came to record the album (after months of writing the backing instrumental parts), an opportunity for pristine sound quality once again arose when Ron Tozier took on the project, even knowing it would overstep its projected bounds. The Beginning of a New Day wound up as a several-month-long project, with both Ron and myself repeatedly staying up through the middle of the night (the 26-minute title track was mixed at 2:30 a.m.) This album set the tone for my now-standard mode of operation: the "how much work can I put into this mix before I drive everyone insane" strategy!